The NSW Department of Planning & Environment has recently requested further information from Santos to inform their assessment of the Environmental Impact Statement (EIS) for the Narrabri Gas Project (NGP). APA has been informed by Santos that this request will result in some delays to the overall project schedule.

Development of APA’s Western Slopes Pipeline (WSP) project is dependent on the NGP proceeding and as such APA has decided to defer submission of the EIS for the WSP until the assessment of the NGP EIS has further progressed.

APA’s view is that affected stakeholders are entitled to increased certainty regarding the progress of the NGP before the EIS for the WSP is submitted.

APA will continue to monitor the progress of the NGP’s EIS assessment and will provide suitable notice to affected stakeholders before lodgement of the WSP EIS occurs.

APA is currently meeting with landowners along the proposed alignment of the pipeline with view to negotiating an agreement for an easement to accommodate the proposed pipeline. Landholders will be progressively contacted over coming months to arrange a time to meet with an APA land access officer. Any landholders with questions regarding this process should contact their nominated land access officer or the project team on 1800 941 145.

APA also recently responded to a series of questions regarding easement negotiation and compensation matters via the Community Consultative Committee.

Four group meetings for landowners along the proposed Western Slopes Pipeline route were held 19–23 February 2018. The main topics of interest raised by landowners included pipeline construction methods, impacts on land use post construction, and landowner compensation for easements. It was good to have the opportunity to explain directly that normal farming and cultivation activities are unaffected by pipelines outside the period of construction, and that landowners are entitled to reimbursement for legal and independent valuation advice related to easement compensation.

Two public meetings that provided an update on the Western Slopes Pipeline project and invited questions from the community were held in Tottenham and Coonamble on 7–8 February 2018, respectively. The meetings were facilitated by an independent moderator, former Mayor of Dubbo Mathew Dickerson, to ensure all views were fairly represented. Over the course of the two days APA representatives answered 70–80 questions across a broad range of issues including the environmental assessment process, land use impacts and biosecurity protocols. As expected there were some strong views shared about the pipeline, but APA is confident that everyone who attended the meetings left better informed about the Project. 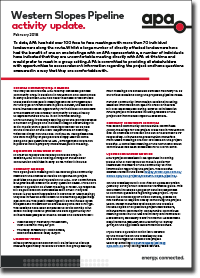 The newsletter contains a summary of planned and completed landowner and community consultation activities and events, in addition to a description of field studies conducted to inform the Environmental Impact Statement.  It also contains APA’s response to a number of recent claims and questions, including discussion of the scope of activities permitted under the Authority to Survey, biosecurity management protocols and applicable weight limits over pipeline easements. A comprehensive reference guide and FAQ document for directly affected landowners was released in mid-2017 in response to a number of commonly asked questions fielded by our project team. The document was updated in January 2018 to provide further information and responses to specific issues raised in various forums towards the end of 2017.